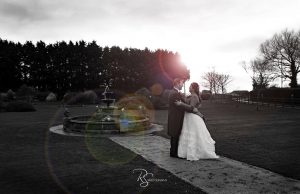 On Friday 25th January we had the pleasure of holding Mr & Mrs Mancini Special day here at Batch Country House.

As guest arrived they gathered in our Garden room for drinks whilst catching up with family and friends . Once Rachael was ready the ushers did a grand job of directing all guest to their seats. When the time come the Bride along with her bridesmaids and page boys  made their way through the large oak doors down the aisle looking truly beautiful ,While their son Oscar did a fantastic job of looking after the all important rings.

After the ceremony guests were greeted with a Prosecco or bottled beer along with some delicious canapés, which certainly went down a treat. The weather was fine which allowed the party to make full use of the beautiful gardens here at Batch. John had arranged for some vintage vehicles to be parked at the front of Batch along with his tractor which were great for the photos.

As four o’clock approached guest were seated in our Ivory Suite the room looked great. Each guest had a frame with their name and chosen menu in it which looked fantastic on the tables, this also then acting as a frame to put their picture from the photo booth in later on in the evening, great idea. A three course meal was then served to all One Hundred Guests along with jugs of cider, beer and wine on the tables. As the meal finished Rachael’s Dad started off the traditional speeches followed by Jon , finished off with his best men.

Evening approached with the arrival of more loved ones to join in celebrations. Our Chefs served up a yummy Hog roast while DJ Gerry Rushton did a fantastic  Job Keeping the dance floor full.

Huge Congratulations to such a lovely couple from everyone here at Batch Country House.

We use cookies to ensure that we give you the best experience on our website. If you continue to use this site we will assume that you are happy with it.Ok
Go to Top